Our Museum | The Historic and Advertising Centre "ARSENAL" 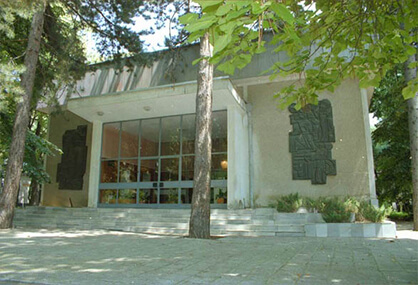 The Historic and Advertising Centre "Arsenal" is situated in a park not far from the administration building of Arsenal Ltd. and lies on an area of 610 m2. It is open to visitors as a museum on 18.10.1974.

TAt the beginning there was just one room arranged as a historic exposition with photo and documentary material regarding the past of the factory.

TIn 1994 one of the rooms was reconstructed for exhibiting most of the articles manufactured by "Arsenal". In the years 1997-98 was performed an artistic updating and reconstruction of the history room.

T Nowadays three rooms are open - advertising, history and a room for old weapons systems, collected, revised and stored since the foundation of the museum. Actually more than 1000 weapons and accessories to them are kept here.

TIn the history room is shown the rich story of the factory - since its foundation in 1878 till the celebration of the 120th anniversary of the Defence industry in Bulgaria. It is divided into three stages illustrated by a number of documents, photos and exhibits.

There is shown the letter of the chief of the Central Military Records Office - Veliko Tarnovo about the "birth date" of "Arsenal", Decree No 1 of prince Dondoukov for the establishment of the Artillery Arsenal in Rousse, a picture of prof. gen. Simeon Vankov - its first Director, a copy of Decree No. 10 of prince Ferdinand and Disposition for the foundation of the Sofia Artillery Arsenal, a number of copies of documents, pictures of buildings and workshops. In the large glass-case is shown the first chronograph "Blanget" for measuring the initial speed of the bullet, diaries, diagrams, revised weapons.

The second stage begins in 1924 when the Sofia Artillery Arsenal was moved to Kazanlak as a State Military Factory to the end of World War II -1945. A special attention here is given to the Decree of Tzar Boris III for the State Military Factory and copy of the decision of the XXI National Assembly published in the Official Journal, the picture of the then Minister of War gen. Ivan Valkov, archive photos of the newly opened workshops and other materials illustrating the enlarged activity of the factory.

The stage after the World War II is characterized by considerable drop of the orders for military products and the orientation of the production facilities for civil sphere. 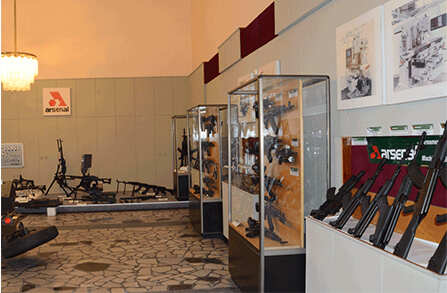 The exhibited diesel engines, electric motors, batteries, radiators, the first lathe "Niles", lathe model 200, the six milling machines, cast-iron mouldings, hard alloy plates, the first - in 1958 and the millionth assault rifle in 1982, the prototypes of pistols and sub-machine guns, exhibits of powders, cartridges and pyrotechnic products of the factory illustrate its intensive and varied development.

The photo copies follow the chronology of the events, that is when the factory passes from one institution to another, changing names and managers, enlarges and extends its structures and activities but always has remained the pillar of the national machine building and the defence industry of the country. A considerable part of the exhibition take the various diplomas, awards, medals, posters, souvenirs from participants at international fairs and exhibitions.

The two visits of the designer of the legendary assault rifle "Kalashnikov" are evidenced by several precious pictures , as well as by a 5,45 mm assault rifle and smoothbore carbine "Saiga 410" with the authentic signature of their designer and Certificate of Authenticity.

Parallel to the production program has been developed the sociocultural and sports activity which results in a number of mountain huts, recreation centres, sanatoria, hospital, sports complex with a hotel, a house of culture, kindergarten, secondary technical school etc, whose photos could be seen in the history room.

The exhibition terminates with a number of color pictures, souvenirs and congratulatory letters for the 120th anniversary of the defense industry in Bulgaria and the 75th Jubilee of "Arsenal" Ltd. on the territory of Kazanlak. 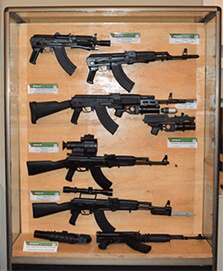 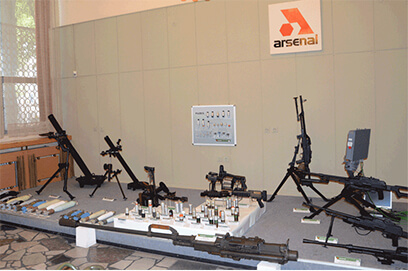 The advertising (show room) is the most attractive part of the museum. The "Arsenal" products list is exclusively rich and in this room the special visitors and guests of the Company can admire and touch most of them. The assault rifles are arranged in several glass cases and pyramids, they are of different modifications and calibres. The grenade launchers are represented by an underbarrel grenade launcher "UBGL", grenade launcher "Lavina"-revolver type. A special emphasis is given to the range of sub-machine guns, the sports and hunting carbines. The firing systems are completed by a various calibre machine guns.

The recoilless systems are represented by SPG-9 and RPG-7V. 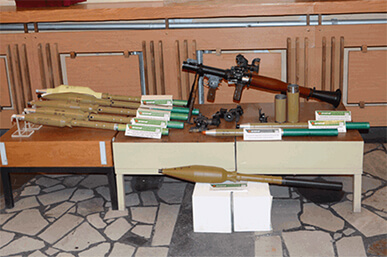 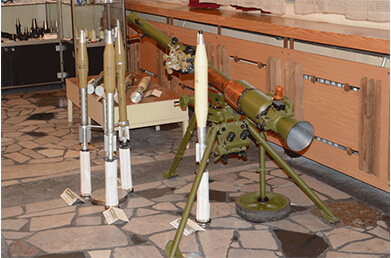 There is exhibited also the newest and update product of "Arsenal" - 60 mm mortar-standard and commando versions, as well as 60 mm, 81 mm and 82 mm mortar bombs.

In separate glass cases are arranged collections of firing ammunitions, powders, pyrotechnic and signaling pyrotechnic products. A central place due to its dimensions occupy the 122mm howitzer and 23 mm anti-aircraft system.

Among the products for civil purposes ths most remarcable are the hard alloy plates and the monolith module system"Varilock" under licence of "Sandvik Koromant"-Sweden, tool holders under licence of "Walter AG-Tubingen, Germany.

The great number of large pictures of horizontal, vertical and universal milling machines, drilling machines and multi-purpose systems practically prove the versatility of "Arsenal" Ltd. and the frequent change and completion with new products-the continuous quest and orientation to the new market demands, to the trends of EU, the NATO structures and to modern technologies of production. 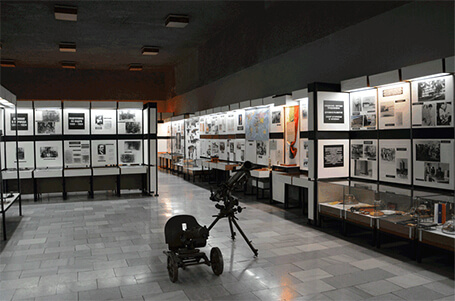 The third room is intended exclusively to admirers and collectors of unique antique weapons which could only be seen on films. In the spacious lobby of the History and Advertising Centre the visitors could see video films on the production processes, the assembly and tests of the new models in various extreme conditions, records of participation in international exhibitions.